And wow, what a ride!

For Pithoigia, the first night of Anthesteria, I opened the new wine (instead of a new vintage, I went with a wine that was new to me, Curious Beasts Blood Red Blend; it was delicious), drank copiously (for me; about half the bottle), and danced for and with the Dead. I also began to make my Necromanteion.

I've wanted a necromantic mirror for communicating with the Dead for years now. In December, I was poking around Ebay, seeing what there was, maybe I'd get something with my giftmas money from family. But really I was just browsing.

I did not expect to find this. 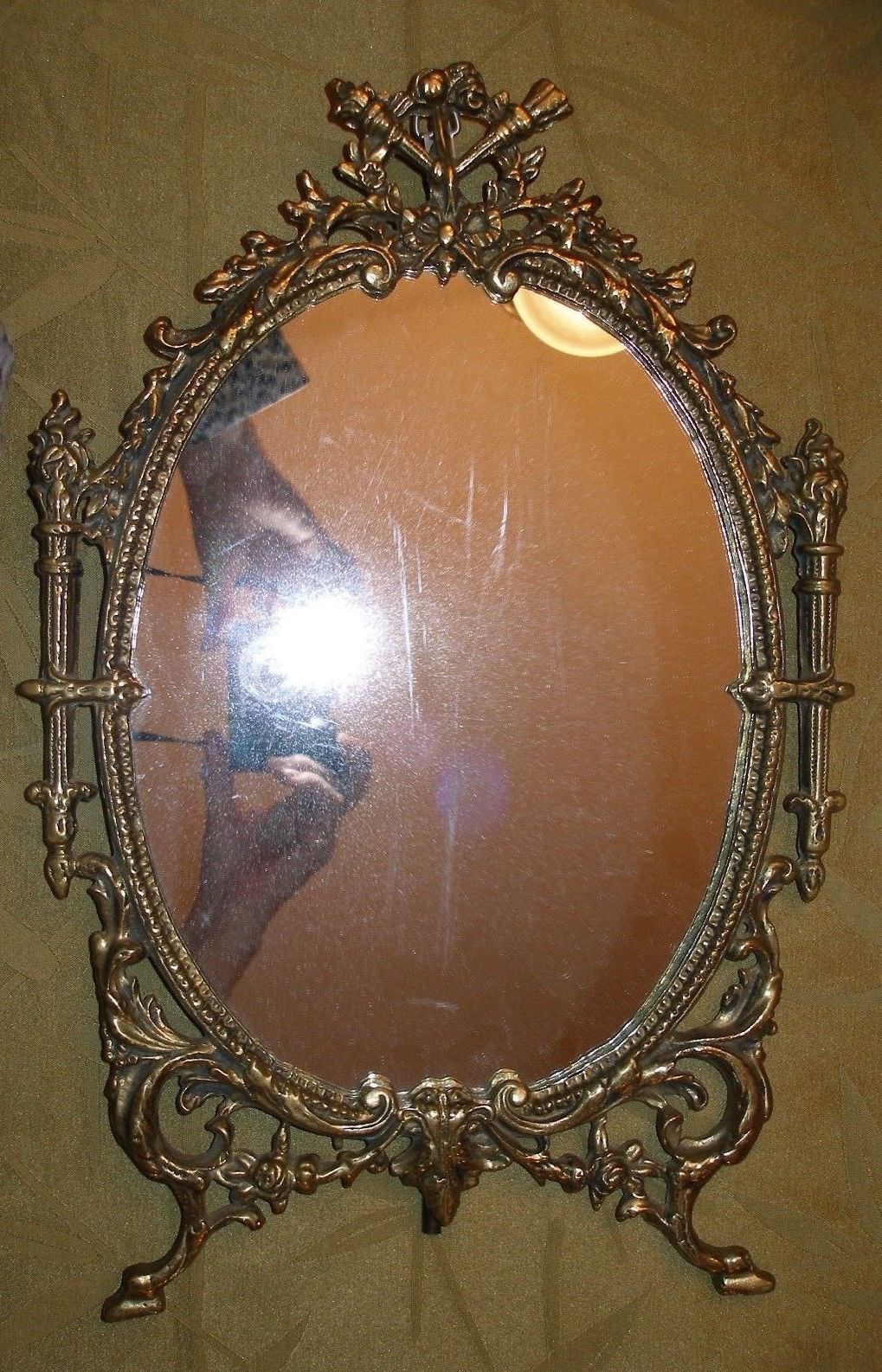 Well, that did it. I had to have it, obviously.

I bought it, and I ordered some Bone Flower Necromancy Oil, and I chopped up tomatoes, potatoes and chile peppers and set them to soak in vinegar, to make a nightshade vinegar to wash the glass of the mirror with. And I put the mirror in a dark place, and left it there.

The Boneflower Oil didn't arrive until last week. I was getting kind of antsy about it, but it showed up just in time for Anthesteria, so obviously that was when I was supposed to make the mirror.

Working only by candlelight, I began by cleaning the mirror's glass with the vinegar and chanting over it. Then I polished the frame and four goat's toe bones I had with the oil. Then I put it all away again.

For Khoes, I got myself a little sake pitcher that reminded me of the shape of a khous, and was more my size (a full sized khous is more than I should drink: 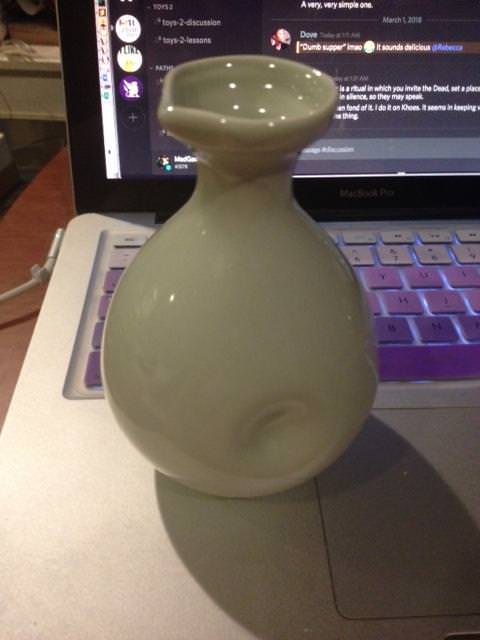 Now, it's one of my traditions to do a Dumb Supper -- a silent meal at which the Dead are guests -- for Khoes. And as I was at the grocery store, picking things up, I found some lamb stew meat for a reasonable price. Thinking of King Midas' funeral feast, I picked up that, some lentils, fennel seed, etc, and decided to give my development of my own Funeral Stew a first go.

Pat dry each piece of lamb or goat with paper towels. For the most authenticity, char grill or barbecue them. Otherwise, toss them in olive oil, salt and pepper (to taste, but I recommend fairly salty). In the bottom of a large dry pot or pressure cooker, heated quite hot, place each piece to sear. Occasionally turn them, until all sides have a hard sear.

If you want a little extra flavor, gently toast your fennel and cumin in a dry pan, being careful not to burn them.

Add the wine, spices and honey to the meat, rubbing at the bottom of the pot to get up the fond (the caramelized stuff stuck to the bottom). Cover and cook one and a half hours on the stovetop or thirty minutes in a pressure cooker. (Or four hours in a slow cooker, if you feel like it.) Wash and check over the lentils.

Uncover and reduce red wine by half. Add lentils, water or stock, and another teaspoon of salt. Cover loosely and cook twenty minutes. (Do NOT cook lentils in a pressure cooker with the lid sealed.)

Results: Should be more highly spiced. More salt on the meat, marinate it in the olive oil for a while, more salt in with the lentils. Try adding more fennel and cumin, and also some rosemary.

An additional teaspoon of salt in the pot helped, and a small sprinkle of cayenne in my bowl helped even more, making the flavors pop and the sweetness come forward. Still needs more complexity, though! Rosemary and anise.

The Dumb Supper went well, and I had pitas, feta, herbed chevre and hummus to go with it. And wine, of course, though by then the rest of the Apothic Dark had all gone to cooking and offering, and I had no more to drink. The next wine was not nearly so pleasant.

After the feast, I took out silver wire and cleaned it some, then cleaned the glass with the vinegar and polished bones, frame and wire with the boneflower oil. Then I wired the bones to the lower frame. (I'm afraid I can't show you pictures.) Immediately, it became very energetic, and the mirror kept clouding over and going dark. This is particularly remarkable for me, since I never get visual effects, and this was clearly seen. But it wasn't dedicated yet, so I put it away.

Khutroi, the third night, I reserved for serious necromantic work, with no wine for me. I made the panspermia with four kinds of rice, three colors of quinoa, black beans, mung beans, and red lentils. I was hoping for it to be colorful, but forgot that black beans will stain everything. Oh well.

I dedicated and blessed the mirror, and immediately began working with it. I won't go into the experience in detail here, but it was very powerful, and my spirit court grew significantly. I didn't get any visual effects other than the glass clouding and going black before each one came through, but it clearly acted as a gateway for the Dead to come through and communicate more clearly.

Next, I did the ritual I call Pouring the Cauldron, a way of opening the gates for spirits who wish to move on but are stuck. Always an interesting time, that.

Having finished with that, I began ringing my big school teacher handbell through the house, announcing, "Out, Kares, Anthesteria is over!" and driving them all down and out the door. Then I spat the beans over the doorsill (which I think is actually a Roman thing, but I always do it), and took the panspermia outside for Hermes Chthonious.

I've been collecting rocks for a herm cairn for Hermes for years now, and just never gotten to it. Now I did, at the edge of my property, in the corner where the fence meets the gate, left the little pot of panspermia by it, and poured and entire bottle of wine over it. 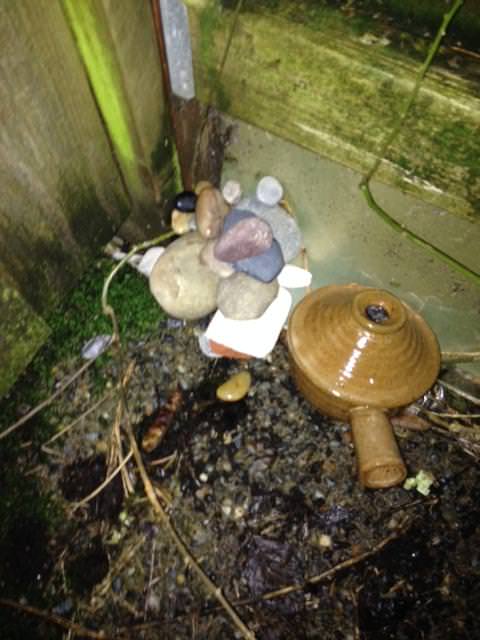 (This is from tonight. The stones fell down a little.)

Then I went upstairs, took a ritual bath, collapsed into bed, and utterly failed to sleep until 7am. I got about an hour and a half's sleep before I was wide awake again. So I figured that while I waited to feel sleepy again, and I hadn't gotten to honoring the Aletides, I'd finish my Ariadne doll. Here she is, with Arachne and Erigone. 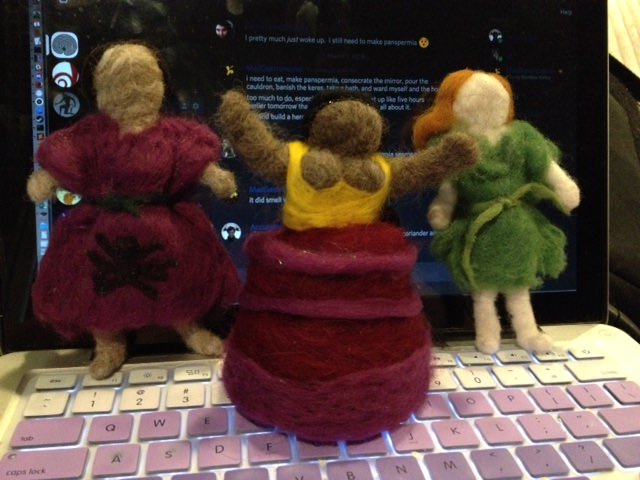 And that was my Anthesteria. If you celebrated it, I hope yours was at least as good as mine!