In the past few months, I finally got around to doing a thing I've wanted to do for a long time: start a baneful herb garden.

Now, it had to be a container garden, because the entire yard has been eaten by the Bramble, and it had to be indoors and in the ritual room because we can't let the cats near it, since they chew on leaves. So it's a very small garden. Just three plants, as of now.

I picked up a Hellebore in early spring, with deep dark purple flowers that made me happy. Useful, I'm told, for banishing, but I got it because I liked it. I ordered a baby Mandrake from Strictly Medicinal Seeds a little later, and it came eventually, tiny and adorable. And finally, a friend gave me a young Henbane, a plant I've wanted for a long time, as it is sacred to Hekate.

The Hellebore got a bad case of leaf spot (a fungus), and lost most of its foliage. It won't grow back until it's gone through a cold cycle, so it'll be a while. That's ok, it's still kicking, though.

The Mandrake is still tiny, and I wish I could put it in a deeper pot to get better length on the root (which of course is 75% of the point of growing a Mandrake), but it's healthy and growing.

The Henbane, despite three bouts with aphids and some wilting lower leaves, is thriving and growing fast, and the other day I found blossoms on it. 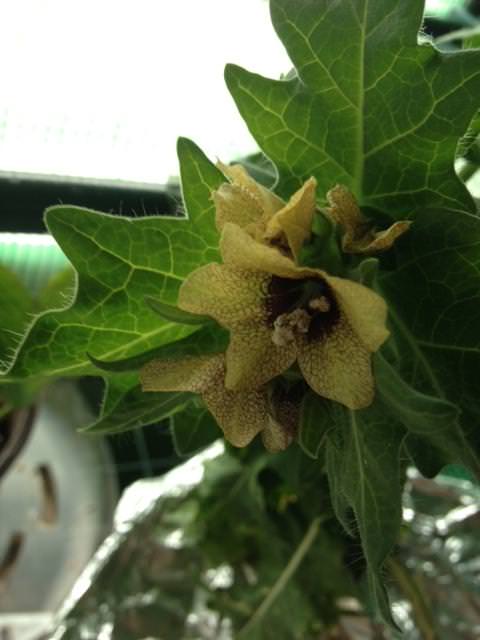 I'm so thrilled! So pretty, with the purple-veined yellow! So looking forward to more!

My practice has been on an ebb tide, pretty badly, so I haven't yet established the link with the plant spirits that I'd like. And I haven't worked with baneful herbs before, and I can't exactly use my usual methods of initial contact with plant spirits, which is making tea to drink from some part of them. One of the traditional methods of connecting with Mandrake is to feed it on your own blood, so I may be trying that soon. I'll need to do some research on Henbane, though. The friend I got it from talked about mild deliriant effects of just have the juice of the leaves on his skin, so I might try that, with great caution.