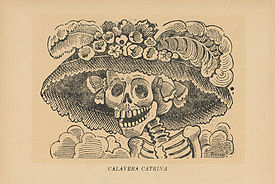 La Calavera Catrina, the Elegant Skull, the Dandy Skeleton, is probably the best-known Mexican representation of Death. The lovely skeleton in the wide-brimmed woman's hat, and usually a fancy dress. You may know her as La Muerte from the gorgeous animated movie The Book of Life. (And if you don't, go watch the movie as soon as possible.)

The above image is by Jose Posada, a late 19th and early 20th Century Mexican printmaker. Posada died in obscurity, but after his death, his calaveras, costumed skeletons that were often featured in his religious and/or satirical cartoons and images, because famous later and his work was revived. Today, they are associated with the Dias de los Muertos, and are famous as folk art and the inspiration for much more folk art.

Among the things I was surprised to learn about La Catrina is that she's quite recent, though her antecedents go back to the pre-Columbian era and the death goddess Mictecacihuatl. Posada's is the first depiction of her, and one that satirizes wealthy and bourgeois Mexicans who spent a great deal of money on European fashions before and during the Mexican Revolution. Death makes all equal, she says.

Posada's La Catrina zinc etching may be the first image of her, but the one that made her famous was Diego Rivera's 1946-1947 mural Sueño de una tarde dominical en la Alameda Central (Dream of a Sunday Afternoon in the Alameda Central).

At the center of the image, a child Rivera stands with his wife Frida Kahlo, La Catrina, and, on the skeleton's other side, Posada himself.

Like Posada's engraving, the mural is highly political, showing the middle-class aspirations and social complacency just before the Mexican Revolution in 1910 -- the year La Catrina was likely made. Both artworks are deeply associated with the Revolution and with revolutionary politics. The Elegant Skull herself is an image of those who aspire to the heights brought low, and a way of laughing at and celebrating Death. Truly, a revolutionary Death in many ways.