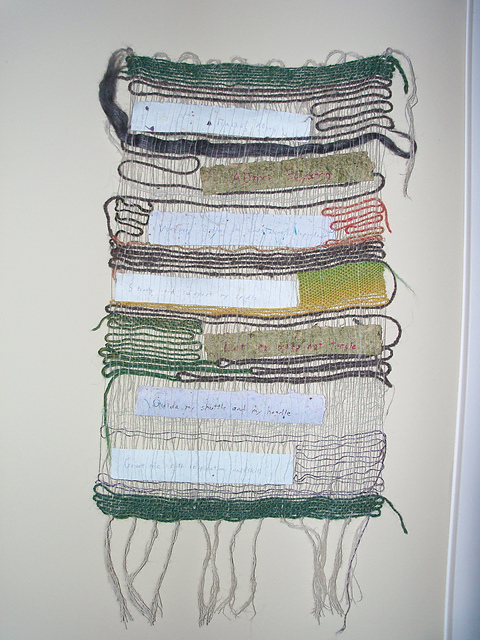 Since weaving and spinning are becoming a significant part of my life again, my art and my meditation, I have been wanting to do a devotional piece to Athene in her guise as patron of fiber arts. At first, I was going to do a small tapestry, but I turn out to be very bad at the planning stage of that. Really. Bad. Ugh. So I've been looking for something else to do.

I found, on one of the Saori groups on Ravelry, the idea of a diary hanging. People with writing words on strips of paper, ribbon, fabric, whatever they liked, and weaving it into the web. So I decided to do that with a prayer to Athene.

Pallas Athene
Athene Ergane
Weaver, Goddess who stands alone, independent
Steady and support my spindle
Let my warp not tangle
Guide my shuttle and my needle
Grant me both inspiration and skill

I am using some of my oldest yarns. A coarse, dark grey wool that was the second yarn I spun when I was learning (the first was a stripy grey-and-white, and I wove it on an inkle loom and turned it into a belt, with a nifty dragon-headed penanular buckle); a green wool-and-mohair that came from a friend's goat, that had died recently (Vincent van Goat, in fact); the very first cobweb weight yarn I spun, a white wool, single-ply and over-twisted, which had been sitting in a skein for twelve years at least, and was hairy and felted and tangled and broken in many places. I pieced enough of the white cobweb together to make a warp out of, and I wrote out the prayer, line by line, on strips of paper I made. I'm also including the newest threads I've spun, reeling silk and bamboo straight of the spindles of works in progress. And I'm using bits of leftover yarn from my last project, the scarf for Kate.

I'm weaving very loose and open, a technique I have not used before, but so far I'm liking it. I may end up backing it with something, though. Which will let me get in sewing as well as the spinning and weaving already there. I might dye the backing myself, too, to get that aspect. I'm also experimenting for the first time with having random warp threads double- or triple-sleighed.

This piece is very much about how far I have come since those first yarns, and how far I have yet to go in my craft. It's also a sacrifice, not just of the work of making it, but of the thread I'm currently spinning, and of the attempt at new techniques.

The imperfections of the piece are also becoming very important. My ancient wool warp keeps breaking, and I have to knot in new lengths to repair it. I leave long ends on these, and do not try to hide them. Where Arachne the weaver showed hubris in trying to compete with Athene at weaving, I am showing all my mistakes and flaws, in humility. (But now I wish I'd added "or break" after "Let my warp not tangle.")

The biggest challenge of this piece wasn't the physical difficulties -- although the warp broke, threads from different sheds caught on one another, and both the warp and the weft threads I reeled off the spindles were "energized" so that they kept kinking up -- but psychological. Weaving so loosely is very new for me, and the way the threads don't lay tidily alongside one another, and the uneven beating, and the warp thread that broke inside the web so I couldn't repair it without undoing a bunch of weaving, and the occasional float, well, they aren't things I'm accustomed to tolerating in my work. I'm having trouble liking the piece, even though it's exactly what I set out to do. Hell, because it's exactly what I set out to do, which was to do something very different for me, to put myself outside my comfort zone, to stretch, as tribute.

Athene has never been a favorite goddess of mine. She's always seemed very distant to me. As I weave this, I'm finding places where I'm closer to her than I thought. I'm discovering things about her independence, her . . . not quite solitude, but her ability to stand alone, and to be strong alone, that are resonating strongly for me right now.

Most of these posts I crosspost to LJ and DW, but I'm skipping it this time. It'll automatically be posted to Tumblr and Twitter, and I'll let it, but I'm also not posting it to any of the discussion boards on Ravelry, not even the one that inspired it, or the pagan one I follow. I'm feeling weird and self-conscious about sharing religious bits again.

If there are tense inconsistencies, it's because I wrote this in bits and pieces as I worked, and not at all linearly.