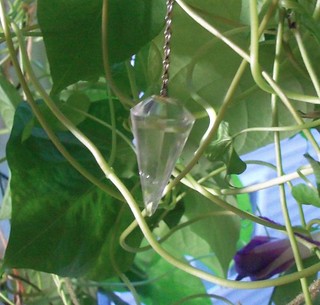 The thing about pendulum divination is that it’s basically used to answer binary questions — yes/no stuff, or you can play hot-and-cold with one, or any either/or question (there’s an old midwife’s divination that hangs a pregnant woman’s wedding ring from a thread over her belly; along her body means a boy, and across means a girl) — or for dowsing, finding, or tracing energy patterns (which all come down to the same thing).

I would be inclined, for my own use, to connect it more generally to the Women of the Purple Thread, although still through Erigone. Many of them were hanged or hanged themselves. But using Erigone, who was still young, and in whose memory a girls’ festival was held, suggests that this divination be done in a fashion more like a children’s game. Perhaps start it with something like a counting or clapping rhyme, pendulum spinning, and the line on which it goes to a flat swing or maybe stopped altogether being the first indicator. Then play hot-and-cold, chasing it down with more questions, if necessary. If so, the skill would be in asking the questions.

An unweighted noose won’t have enough weight on the end of a rope to make a good pendulum, but a well-weighted doll would. I went looking for the little clay doll that’s a replica of one found in some Greek ruins, I forget which ones, but I’d quite forgotten that my young friend stole it and gave it as an offering to Hermes (who is not inclined to give it up; I asked). I’m poking around for something else to use. It needs to be no more than about 2-3”, well-weighted, and compact to work as a pendulum. I’ve got all the Poppets, but I don’t think those will work for various reasons (starting with them having their own meaning and personality). I suppose might try making a knotted-rag doll and weighting it with beans or something, but that would be clumsy — loose fabric would slow the swing. I have air-dry red clay, and might try my hand at sculpting with that, or with Sculpey or some other more modern material. (I’ve got some two-part epoxy clay someplace, I think.) There wouldn’t be anything wrong with buying one at a toy store, but it would need to be small enough and heavy enough; money’s too tight for me to spend any at all, we’re counting pennies. A fancy doll could also be carved from some dense wood or root, or bone, but I don’t have the skill for that. My modeling skills aren’t good, but they’ll probably do.

Of course I’ll be spinning my own hemp for the noose and line, although there’s no reason anybody else who wanted to try it couldn’t just buy twine. One of the really great things about a pendulum is that you can make it from nearly anything. All you need is a weight and a line or string or chain. Pick up a river rock, tie a bit of string around it, with at least four or five inches for it to swing by, or use a fishing weight and line, or a binder clip and thread, whatever you have handy. For this, the symbolism of a doll and noose is significant, but any doll of appropriate size and weight will work. It is important that the line or chain not be too heavy for the weight, that the line be pliable enough, and that the mass of the plumb be compact.

One thing to know about pendulum divination, though, is that it’s highly susceptible to influence by the person holding the pendulum. It’s very very easy when divining for yourself to simply pick the answer you want and to unconsciously change the swing. Unless you’re specifically trying to get at answers from your own subconscious, pendulum divination is best worked by someone other than the querent.