I get so frustrated trying to research Hellenic fiber arts. We have so few depictions of the processes, and no examples of any wooden tools, including looms. Things like clay epinetra, as I mentioned before, survived, but wood just doesn’t last in the Mediterranean. Nor does wool, so we have very few examples of finished cloth. But it’s more than that. There are all these historians who, like the Wikipedian who wrote about epinetra, are simply talking out their asses. They know nothing about how cloth is actually produced, or thread, or how wool is processed before spinning. They look at depictions on vases, make a guess at what they show, and that description sticks, despite the fact that it has nothing to do with reality. 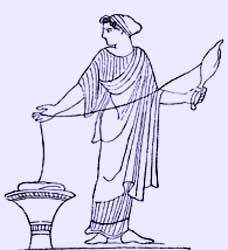 I got that image from this page, which describes the image as “Woman spinning, filling a baket "Kalathos" with yarn,” which it plainly is not. She’s not spinning. She has nothing in her hands with which to spin, no tool that could possibly be twisting the fiber. It looks to me like she’s dressing a distaff with wool roving instead. Or she might be loading a shuttle stick with thread, since those also seem to be wound this way, but some other depictions of women in basically the same position definitely show the strand of fiber as much thicker than thread elsewhere in the scene:

And some show wool being taken out of or put into the same kind of kalathos basket as plainly much wispier and looser than any yarn: 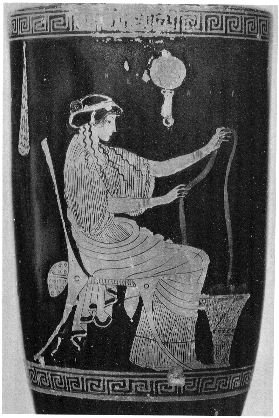 On the other hand, the lefthand figure in the second pair on this vase very plainly is spinning, while her companion is either dressing an indistinct distaff or ordering combed wool into roving and dropping it into a basket:

That’s a low-whorl drop spindle hanging from her right hand, and a dressed distaff in her upraised left hand. And you can see there that the thread she’s spinning is depicted as much finer than the stuff her companion is working with.

By the way, the notes on the piece I got that last image from describe a spindle thus: “The spindle was a stick, 10 or 12 inches long, having at the top a slit or catch in which the thread was fixed, so that the weight of the spindle might continually carry down the thread as it was formed.” That’s not the author’s description, it’s taken from a University of Chicago piece. But what leaps out at me is that it neglects one of the most physically important parts of the spindle, the whorl. It’s clearly a drop spindle, not a stick or a French-style that requires the hand to be on it constantly, turning it manually. It must be able to maintain a spin once set in motion, or it will backspin, all the twist will be lost, and the thread will fall apart. You can clearly see the whorl in the image, too, the tapered knob at the bottom and the flatter part above it. Without a whorl, spinning on a drop spindle is impossible. And yet whoever wrote that description is so ignorant of how spinning works that they left out that crucial detail.

I see it again and again. Historians thought that depictions of warp-weighted looms couldn’t be accurate, because they thought of looms as horizontal, and assumed no one could weave on a contraption like that… until someone pointed out that similar looms were still in active use in other parts of the world, and that a reconstruction certainly could be woven on, pretty easily by anyone conversant with other kinds of loom. They never thought to ask actual weavers, though, just as they never think to ask spinners.

I came across another reference to an epinetron as being used for protection, this time while roving wool. But if they were used to protect clothing, why were they so small? If they were used to protect against, say, the use of some sharp object, then why are they never shown as being used with one? And in any case, why are they textured the way they are if the texture isn’t meant to be used? I just… they seem to spend no time at all considering reality, only theory.

On the up side, while doing the same research, I came across this: 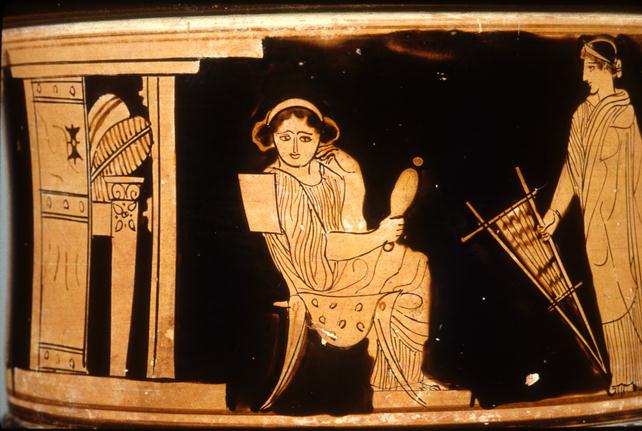 I’ve seen an illustration of a frame loom similar to the one the woman on the right is holding before, but a seated woman was holding it, and the side pieces looked like they ended and were resting on her lap. I wondered how on earth they had it braced, because that’s unstable even with the angled sides and the corners would shift without some serious joinery. But if they’re that long, they must be connected at the bottom, which makes it a really simple thing to build and much more stable. As an added bonus, those should be long enough to rest on the ground, putting the web at lap level for weaving. Now I have to try to build one at some point.