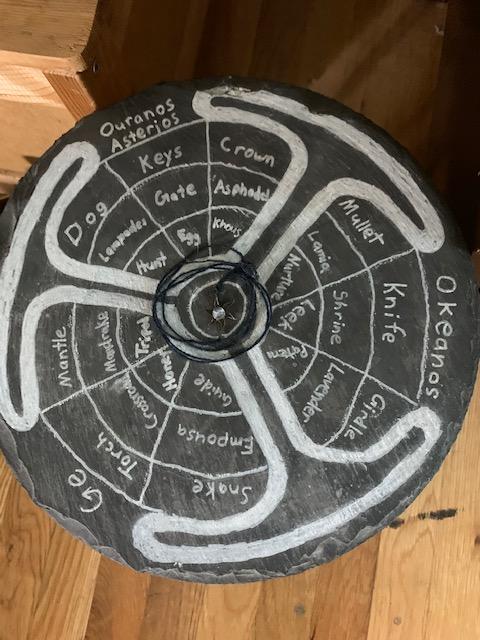 I think I've been trying to write this post for three or four years now. Here it is now though! I finally took a chalk marker to the slate so you can actually see clearly what's on it, so I thought that was a good time.

This is my Strophalos, or Hekate's Wheel, oracle. It's a round slate cheese board bought off Amazon and drawn in with chalk and then chalk marker. Now that it's finalized, I'll probably lay down a couple of layers of spray coat to keep it from being smudged.

The Wheel, the design of which is based on the symbol known as Hekate's Wheel (strophalos is the Greek): It's divided into three sections, representing the three realms Hekate has dominion over, Ocean, Earth, and Starry Heaven, granted to her by Zeus (according to Hesiod). Each section is divided into three rows and three rays. Each of these nine subdivisions has a category, and each section has a particular thing associated with Hekate that is part of that category.

That... sounds more complicated than it is. Let me sum up.

Each of the three sections, starting from the top left, has a place for one of these:

Writing this up, I've just realized that at least one of the things actually on the Wheel is wrong. Glad I haven't coated it yet!

Here's what's on there:

In the center, with its cord spiraled around it, is a star pendant with a moonstone, to reflect the star at the center of the wheel symbol. I wear this while divining.

To divine, I use three partially burnt matchsticks, to echo torches. I invoke Hekate, ask for her guidance, and give the question to be asked, whether mine or someone else's, while holding the matches in my cupped hands. Then I drop them, and read where they fall. The sense of the message is read clockwise from the top (Starry Heaven), and each individual piece is read from the head of the matchstick to the end.

Rather than there being hard and fast meanings for each of the words, I interpret intuitively, based on my knowledge of each of these things in the context of Hekate. Perhaps at some point, I'll write up a vague summary of what they mean.

For now, this is what you get.