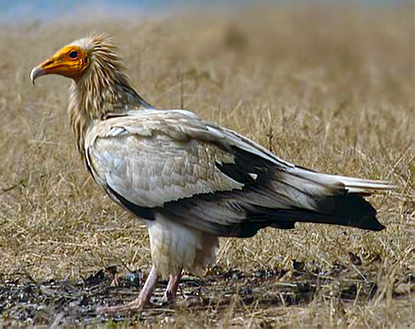 This lovely creature is an Egyptian Vulture, sometimes known as Pharaoh's Chicken, which was a symbol of the Pharaohs of the Upper Kingdom, and sacred to Nekhbet, oldest goddess of Upper Egypt, and often used as a symbol of the feminine, as the scarab was of the masculine. (Egyptian vultures show no sexual dimorphism, and both parents nurture their young, leading the Egyptians to think all of them were female and they reproduced parthenogenically.) Taxonomically designated Neophron percnopterus, they are the only surviving species in their genus. Like most vultures, they eat primarily carrion, they are also opportunistic predators, and eat whatever small animals they come across, as well as the eggs of other birds, which the often crack open with small rocks.

Pebble hammers aren't the only tools they use, though. They also wind wool around sticks to use in next building.

These are birds that spin. How awesome is that? They aren't found only in Egypt, but also in southwestern Europe, and Asia as far east as India. A famous pair of them visited a temple at Thirukalukundram for centuries, and were ceremonially fed by the priests there every morning, with offerings of rice, wheat, ghee, and sugar.

They're extremely social birds, too, and the use of tools is apparently a learned behavior passed on through groups. Some of them are known to paint their feathers pinkish or reddish with soil that contains iron oxide. They're dyers, too! Or at least into body art.

The genus name comes from Greek mythology. Antoninus Liberalis tells the story in his Metamorphoses of a young man named Neophron, whose friend Aegypius became the lover of his mother Timandra. Seeking revenge, Neophron seduced Aegypius' mother Bulis, then tricked her into sleeping with her own son. Finding what she had done, Bulis gouged out her son's eyes and killed herself. Aegypius prayed to Zeus for revenge, and Zeus, apparently in a sort of "a plague on both your houses" sort of mood, turned both Neophron and Aegypius into vultures, and both of their mothers into other birds. Timandra became a tit, according to the Greek Mythology Link. I can't find what sort of bird Bulis became.

Percnopteros means black-winged. Aigypios is Greek for vulture, which presumably connects to Aigyptos, Greek for the Nile River, from which we derive our name Egypt, and which brings us back neatly to the sacred bird of the Upper Nile. There's also this whole carrionbird-eyes-Oedipus thing I'm really digging.

(Timandra, incidentally, was also the name of one of Leda's daughters by Tyndareus, making her the sister of Clytemnestra and half-sister of Helen. Doesn't seem to be the same Timandra, though. Mentioning it for the Helen connection.)

Now I want a support spindle with a motif of these birds. With yellow faces and red-dyed feathers.

I got all this, and more I can't fit in right now, from the Wikipedia entry, and from the Egyptian Vultures page on Avian Web.