Behind my townhouse is an empty lot. When I moved in, oh, seven or eight years ago, there was a house that was falling in, but they demolished it, hoping to build yet more townhouses there. The real estate boom went bust, and nothing ever went in. Now it's full of ivy and blackberry and madrones and what I think are cypresses. It's a lovely pocket of green. My balcony overlooks it.

I've been sick this past week. Sick enough that I went to the hospital to get checked out. Nothing too serious -- they gave me tests and a lot of fluids and sent me back home -- but it's really wiped me out. Just going to the store leaves me shaking and exhausted. I've been spending a lot of time slumped on the couch, not doing much more than reading comics and watching movies I've seen before. Today I had slightly more energy.

And then, as I sat here, I heard the sound of piping. A wooden flute. Drifting in from that little pocket. I popped my head out and called a compliment to the aging hippie. After a bit, I went down there. He had a tiny fuzzy dog with him, truly adorable. Long gray hair under a cap. A hoodie turned backwards under a coat -- the dog rides in the hood when he's on his bike. A walking stick leaning on that same bike. He was in the neighborhood, and just decided to stop and play. He says he does it fairly often, though I haven't heard him before.

A strangely dressed man, backwards and upside down, playing a wooden flute and accompanied by a little dog, in the nearest thing to wilderness we have. 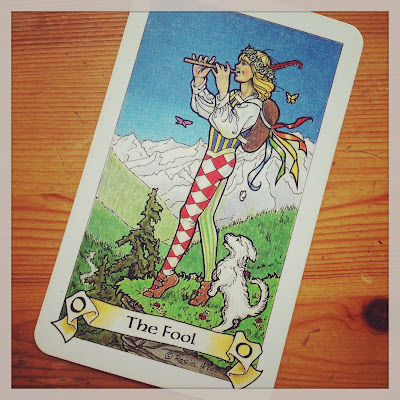 (The Fool from the Robin Wood deck.)

And, of course, in the Mythic deck, the Fool is: 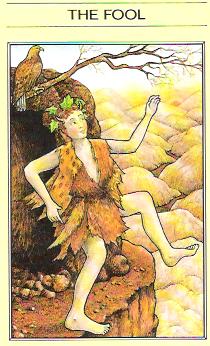 none other than Dionysos himself.

Nothing can be so firmly bound,
neither by illness, nor by wrath or fortune,
that cannot be released by Dionysos.