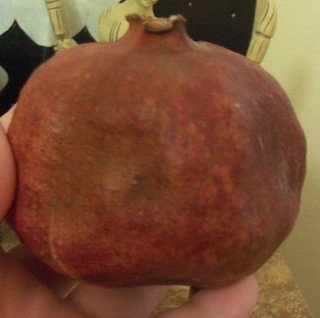 At some point, in some store, I came across a Christmas tree ornament that was a miniature dried pomegranate, about 3” high, that had been lacquered, painted purple, and covered in tiny glass beads so it was shiny. It was kinda pretty, and kinda tacky. What was cool about it, though, was that as it dried, the seeds came loose, and it rattled.

I resolved to try to make a pomegranate rattle.

I started by taking a whole pomegranate with no bruises or splits in the skin, setting it on a wire shelf in the back of a closet, and making sure that there was a bit of airflow.

Three years later (I live in a damp place), I thought it might be dry enough to make a rattle out of. Tapping on it returned a sound like tapping on thin wood. The seeds hadn’t come loose, though. I ended up drilling a hole through the top and another through the bottom, threading in a stiff piece of curved wire, and knocking them all loose. Then I left it like that for a few more months to make sure the inside was thoroughly dry. 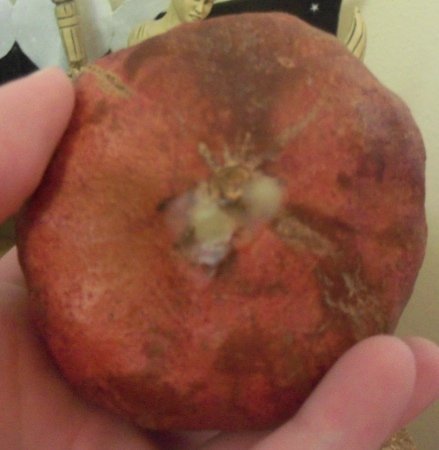 The seeds did indeed rattle now, but very softly. Finally, I took some tiny glass beads, dribbled them into the hole, and then sealed both holes with beeswax. It’s still a fairly soft sound, but there’s definitely more of it now, and I didn’t want a hard sound in any case. It makes a pretty good ritual rattle for my purposes, which is mostly just rhythmic backup to my own chanting or to music I’m playing.

I have another pomegranate dried and waiting to be drilled. 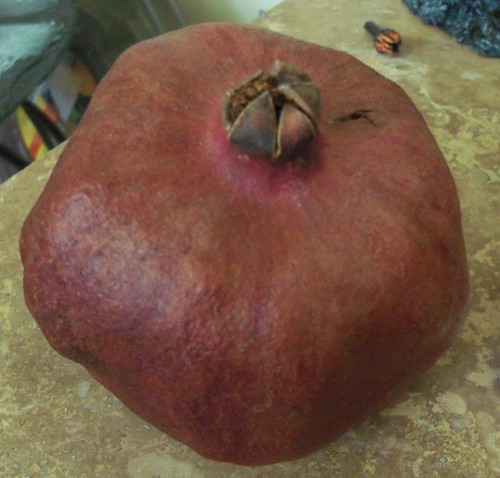 This one is significantly bigger. The small split you see occurred during drying, so it didn’t let in mold spores and rot, which is the danger in a split in the fresh fruit.

If you want to try this, you should be able to speed the drying by doing things like living in a desert, regularly leaving a fan blowing over the pomegranate for hours or days on end, putting it on a wire rack in an oven on very very low (warm setting) and leaving the door open. Still, expect it took take months or a year before it’s dry enough to use. It might be sooner, but don’t count on it. You might also be able to speed it up by drilling the holes after the outside is dry but not the inside and leaving a fan aimed at one of the holes, but I can’t make any guarantees about that, it’s just an idea.

If anybody else tries this, let me know how it turns out!