After months and months of this sitting around because I’d lost the last two strips of silk for it, my prayer hanging for Hermes is finally finished. 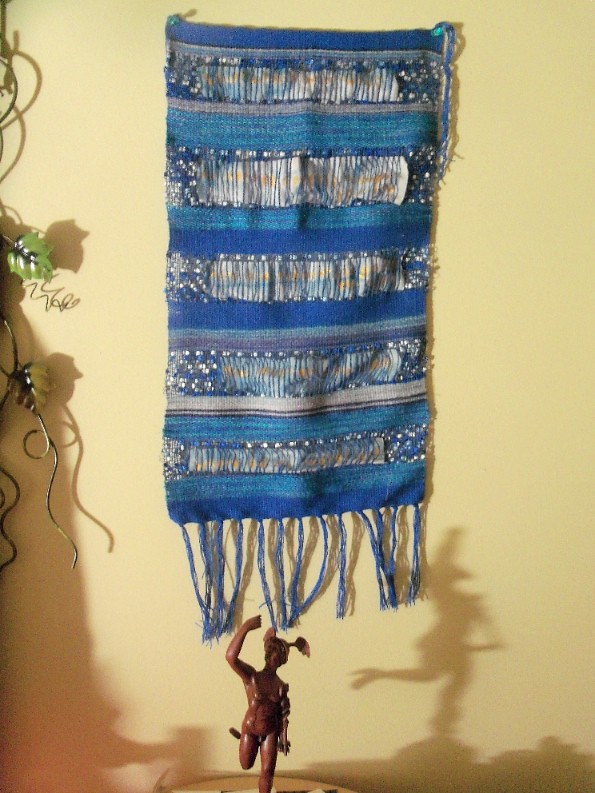 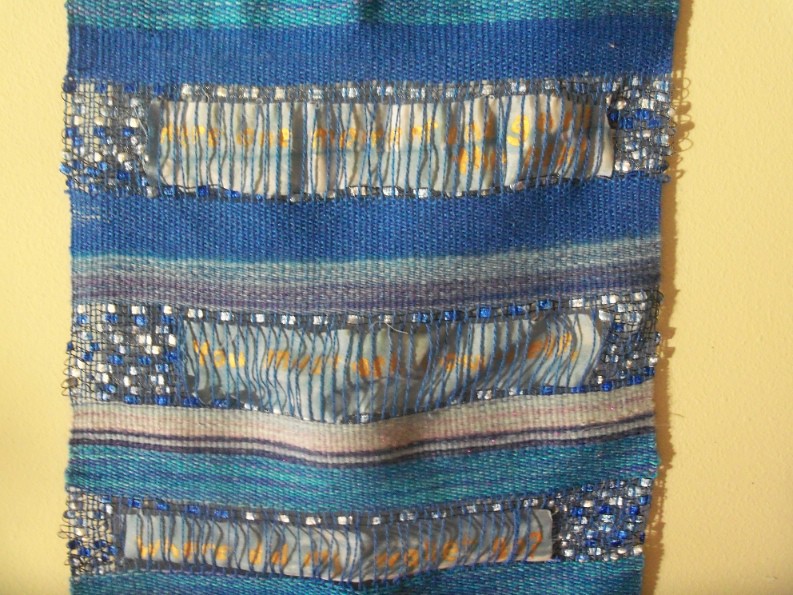 What? When? Who? Why?
As Hermes speeds through your life.
Here one moment and gone the next.
Leaving nothing but a ghost of a smile and a hearty laugh.
You must ask yourself.
Where did my wallet go?

It was written by Cataphract, and I found it on the Polytheism Without Borders forum.

The lines of the prayer are painted in gold on cloudy indigo-dyed silk I did myself many years ago. The very fine variegated blues with the touch of pink sparkle is my own handspun. The plain blue is a wool-silk blend I had hanging out from many years ago, when I wove a present for my mother on the big loom. The other variegated blue is an unknown sock yarn (I think) someone sent me as part of a destashing* effort.

Keep the bits and piece in an envelope or folder or something, attached to the damn loom somehow, or you will get stalled for month when you lose them.

Stiffen thin fabrics with something before using them in this kind of project. I had those silk strips twisting and coming loose the moment I cut this off the loom. I may end up sewing the entire thing to a backing and sewing each fabric strip down separately.

When you have a finer reed, use much finer thread for the warp. Couldn’t on this one, because it would have gone all to pieces at this sett, but this warp is thick enough to obscure the text. Higher contrast text would be good, too. Whatever. I know what it says and so does Hermes, so I’m content.

Overall, I’m satisfied with the piece, and am happy to have finally finished something I promised Hermes so long ago. (ETA: Only I just realized that I really did lose one strip, because there are six lines in the original and only five in the actual hanging. I'll have to see what's missing when I get a chance.)

For the next prayer hanging I do, whenever I do it, I’m envisioning a continuous ribbon, with loops left loose above the weaving as it winds from line to line. Grosgrain or something, probably, for the stiffness. It would take somewhat more planning, though, to get the text all on there and correct, and I’d have to find some kind of permanent ink that would be fine-tipped enough to write on ribbon but wouldn’t spread badly, and didn’t come out looking like a laundry marker. Argh.

A refined version of this idea is something I’d love to be able to offer for sale, but the effort is pretty intense, materials are expensive, and I just don’t know that I’d be able to get the word out to the people who can actually afford it. This piece represents about twelve hours of work for painting the words, dressing the loom, weaving and finishing. I mean, there was a lot of trial and error in there, and hopefully I would be able to cut that down a lot with practice at the form, and the cricket is much slower to weave on than a floor loom, but it’s a lot of time. And then there’s materials costs, and nice yarn are not cheap, let me tell you. Plus this one, of course, also has handspun and hand dyed elements, and that would just not be feasible to price. Maybe when I have a Saori loom, I might be able to set up one warp and do several pieces, both small single-line things and larger, longer ones, and be able to price them lower. Something to think about. Of course, I’d also have to actually start selling things again, which I’m not 100% certain I want to do. It’s all far in the future anyway. There’s no Saori loom anywhere in the forseeable future for me.

Now I have a naked loom, and no particular next project in mind. Maybe time for another attempt at straps. I’d meant to save the charkha-spun cotton for a single largish piece, but maybe I’ll try some straps again. I’d need to do some dyeing for it. I’ve got the green from the hemp dyeing, plus the natural white and brown, but I’d want some others. I haven’t got any more procion dyes, but maybe I’ll fiddle around with some natural ones, if I have the stuff.

*Destashing: The attempt to thin out one’s yarn or fiber stash so that one has more space to put more yarn or fiber into. Generally it’s simply moved from one person’s stash to another. Some yarns can spend years moving through several people’s stashes before finally being used or tossed because it’s become too fragile. Sometimes they even come back around to the original person.