I have started to work with new spirits lately. They aren’t ones that have sought me out, particularly, but ones whom I have found in my work, and am attempting to build a relationship with. For the moment, that means creating a tiny shrine for them, and chanting to them in my evening spinning. 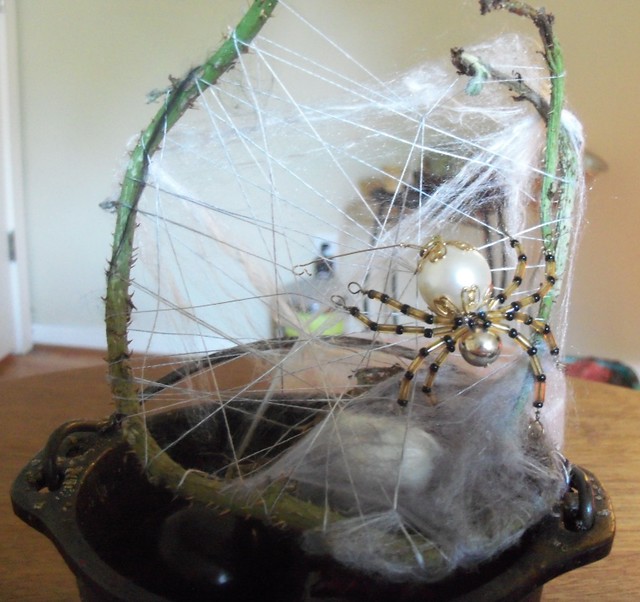 Tiny shrine to Spider and Silkworm, bramble wrapped in spell-thread, with beaded Golden Orb Spider and, covered in silk, an actual Silkworm cocoon with dried silkworm inside.

My Spider is not, for example, Sannion’s Spider, nor Anansi the Spider, nor even Arachne as the Mother of Spiders (although certainly she’s closer to Arachne than to any of the others). I’ve never heard of anyone else working with a Silkworm spirit, but if I had, I doubt that this would be the same Silkworm, either. (Maybe, though; Silkworms are much rarer in mythology than Spiders. Maybe I should look into Chinese traditions. I’ve already found the Empress known now as the Silkworm Mother.)

I hope that Spider and Silkworm will become specifically my allies in magic that uses spinning and weaving (this relationship is still in its very early days). They are witches in the same way that Sarah Anne Lawless and Harold Roth, aka the Alchemist talk about some plants being. They are witches differently than I am a witch, but I wish to learn their craft and spells, and indeed have already learned some. We are part of a sisterhood, bound by our threads. It is on that that I hope to build a relationship, on this that I give them a place in my home and my shrine room.

I spin, chanting to them, and feel myself slip into a light trance that I do not when spinning my morning prayers. I feel the silk slipping between my fingers, and know that I am echoing their actions.

I know that Spider weaves her golden webs, only to have them damaged and destroyed (and indeed sometimes she destroys them herself), and to build them again in new and more beautiful ways. She knows the cycle of creation-destruction-creation.

I know that Silkworm sheds multiple skins and is renewed like a snake before finally weaving her cocoon, her womb, and then transforming herself into something completely different. She knows the cycle of birth-death-rebirth.

I don’t know what offerings to give them. Incense? Food? Drink? Flowers? Leaves and insects? Tea? All I know to do for them is spin, and chant. Soon, I’ll ask what more to do, through tarot or the Hellenic alphabet or geomancy, whatever seems to fit best.

Spider, Spider spinning spells
Show me how you weave your web

Silkworm, Silkworm spinning spells
Show me how you weave your womb