Last night, I had bad insomnia. I’d taken a sleeping pill, and then another half, but nothing was working, so I had a snack and some chocolate milk with just a bit of creme de cacao added. (Normally, alcohol is not a good way to get to sleep, especially not on a regular basis, but on a bad night, just a bit can kick the sleeping pills into action.) Feeling it take effect, I crawled back into bed, but before I could close my eyes, and with last night’s post still swirling in my head, I had to get the following myth down on paper. Or pixels, anyway. I was typing with no glasses on and half-open eyes, so I couldn't really read what I was typing, and this morning I was surprised and pleased to find a coherent story with far fewer typos than I'd feared. 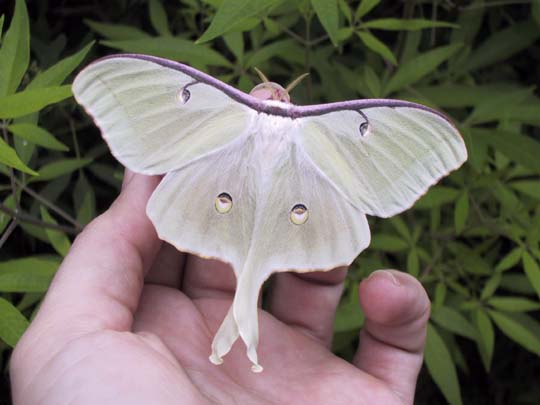 Arachne, clearly, is a golden orb spider. They the finest spinners and weavers of the arachnids. Arachne draws gold, golden thread, more royal even than purple, out of her body, and what she weaves with it is truly awe-inspiring. It brings me to tears.

But Ariadne, she of the thread that leads to the center, she is a silkworm, a silkmoth. She knows the mystery that lies at the heart of the labyrinth, better than even old Daedalos, for, like her aunt and cousin, she too has learned Hekate’s lessons well. She knows that in her brother’s labyrinth there is a path down as well as a path up. But she cloaks the whole matter in her threads as she spins them, from the outside in, to protect her brother until the young warrior arrives. The young warrior who has the right to sacrifice Asterion, so that his spilled blood may open the gates in both directions. But this is not a mystery that the young warrior is meant to know. He has done his part, and so Ariadne’s baffling, muffling threads show him the only way out of that place that he may know. She knows that the sacrifice has been made, the mystery at last completed, and so it is time for her to herd her “rescuer” off this island, get him away to his own kingship, while he abandons her, just as she plans.

There, there in the trees of Naxos, she finds a tree in which Arachne spins, her web mighty and strong and golden and so beautiful as to bring tears. Let me show you, kinswoman, my kind of spinning. Let me hang you from lead lines and bundle you up tight in your own kind of thread, a new kind which I have learned from spinners far away. Here is how you draw it out of you, out of your strength and your sorrow. Here is how you build your labyrinth with it, from the outside in, so that in the center you may make your sacrifice. Hang from the tree, thus, cushioned in leaves, until you are ready to return.

But along came Dionysos Lysios, the one who releases, and seeing her through her shrouding threads, he took the sorrowful maiden for dead, and swore to retrieve her soul from the underworld. He did not know the secret of the labyrinth, did not know her cocoon was a labyrinth, that she was in both worlds at once, alive and dead. He found his own way down, following the path that his cousin had given him before, past the frogs, for he was still quite young and did not know other roads. Yet. He had not yet struck his bargains with either Hermes or Hekate, and he had not yet gained enough of his sister’s respect for her to ransom a girl only on his say-so.

But he found her there, where her soul nestled in the golden grove, wrapped in the leaves of oak trees.

“Come out, come out of there,” he called. “I am here to redeem you, to set you free to return to the mortal world. To make you my wife.”

And Ariadne peeked at him through the hole she had made in the end of her labyrinth cocoon and said, “Oh are you?”

“Yes!” he cried, “For I am the Bacchic, the Bull-roarer, the freer from constraints, the liberator, the savior. And I am here for you, because I love you.”

“Oh do you?” said Ariadne, pushing her face a little further out, so she could see him properly.

“Yes, yes, I do! I am the lord of the vine and the cup, of the root and the shoot and the rot! Love me, and I will take you out of this place!”

“Oh will you?” Ariadne said in a voice dark with mysteries. “And do you know the way out, my beautiful one?”

“None may return by the path you came down, but it is no matter,” she said, struggling higher. “I am of the blood of Titans, a child of Earth and Starry Heaven, and if you will call me an equal partner in our marriage, then I will pledge to you, and I will show you the way out, and you will feed me on nectar and ambrosia. And we will, together, make of this grove a great feasting-place for the heroes who will follow us, and the first of them shall be Asterios, my brother, and you shall take his name as one of yours, in honor of his sacrifice that he opened the ascending path for us both.

And now she was halfway out of her cocoon, and he could see that she was naked, except for a strange cloak that draped down her back. And she was beautiful to him.

“I will do as you say, oh lovely one! You are truly my equal, for you know the way and could rise again without me. I would find my own way out, as the sprout of the vine always does, but it would not serve to set YOU free. But yours, it seems, will suit us both together, and so together we will walk it, and you will be my equal and my wife, and the wedding celebration on Olympos and in this grove shall last many days, and I will hold the cups of nectar and of wine for you with my own hands, and I will drop the morsels of ambrosia between your waiting lips, and together we shall be god and goddess, wedded eternally.

“Good,” Ariadne said, “For the entrance to the labyrinth is not far from here. I can smell my brother’s blood, and I will show you the way.” And now she emerged fully from her cocoon and gently spread her pale soft wings, the wings she would give to the moths who would spin silk that mortals might harvest easily, unlike the silk of her friend’s children, and white where theirs was golden. She collected her cocoon, that it might be spun and woven into the long robe she would wear at her bridal feast, and thought, briefly and kindly, of all the silkworms to come who would sacrifice their lives to give their gift of silk, trapped in the heart of their own labyrinth. 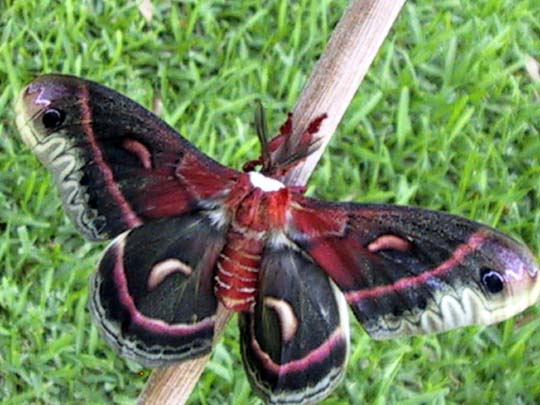 Hyalophora cecropia silkmoth, another wild American species. Wormspit again. All of these are. 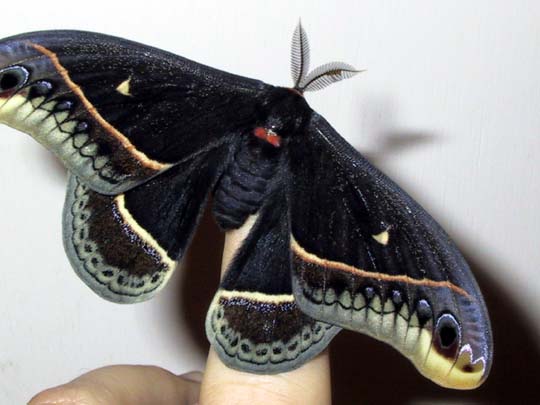 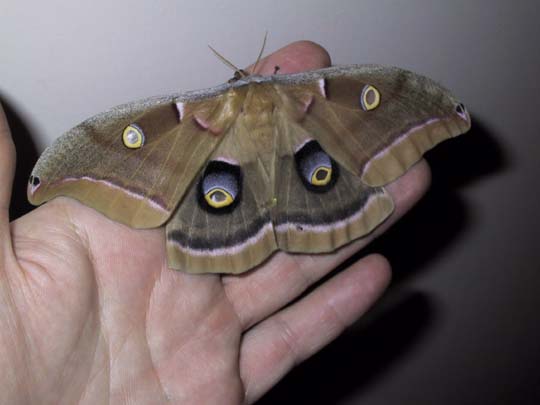 Antheraea polyphemus; another North American species, this one more closely related to the semi-domesticated moth that produces Tussah silk 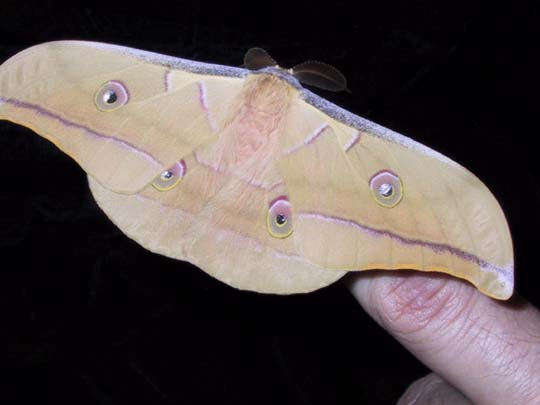 Antheraea pernyi, the aforementioned Tussah silk moth. Perhaps the moth I associate most closely with Ariadne; I put Luna at the top because she's my favorite, though. 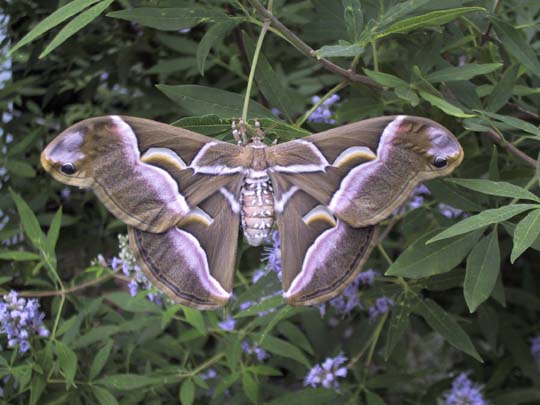 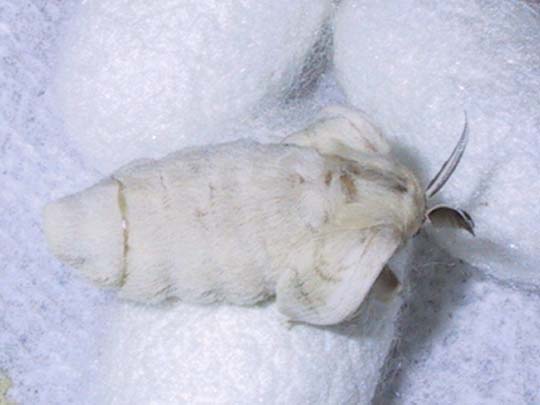 For completeness, here is a female Bombyx mori, the domesticated silkmoth, which has been cultivated for thousands of years. They are never allowed to fly, and over the generations have been bred to have wings too small for it, so that they don’t escape with their precious eggs. The males have somewhat larger wings, but still not enough for a significant flight.

The cocoon of a bombyx mori, a pure white where wild varieties are brown to honey-colored or even bright gold. The cocoon itself is a single long strand that can be reeled into the softest and smoothest silk, like the silk shirts you buy in stores, but the “blaze” of fiber it hangs from can be used in handspinning, too, or machine spinning for slubby fabrics like raw silk and dupioni.

Now for a bit of history. The cultivation of silk began, of course, in China, during the reign of the Yellow Emperor, Huangdi, who tradition says ruled from 2698-2598 BCE. Four and a half thousand years ago. It was his wife Leizu who began it. A wild silkmoth cocoon fell into her tea, and the heat loosened it so that it began to unravel. She found she could just wrap the slender thread around her finger and unwind the entire thing. She persuaded her husband to give her a grove of mulberry trees (that’s what silkworms eat, and what makes their silk so white), and so began sericulture. Leizu is still venerated today in China as the Silkworm Mother, alongside her husband, who is the Father of Chinese Culture.

Silk began to reach the West by the 4th century BCE. The court of Alexander wore it. By the second half of the first century of the common era at the latest, how it was made was known by Pliny the Elder, who wrote, "They weave webs, like spiders, that become a luxurious clothing material for women, called silk." Actual silk cultivation in Europe, of course, came much later, so while the appearance of the moth in my small myth is anachronistic, the presence of silk itself is not. There is no myth I know in which Ariadne bears wings, moth or otherwise. But it is so obvious to me, the way the cocoon echoes the labyrinth, that this story suits me. This is some small part of what I mean about silk and mystery.